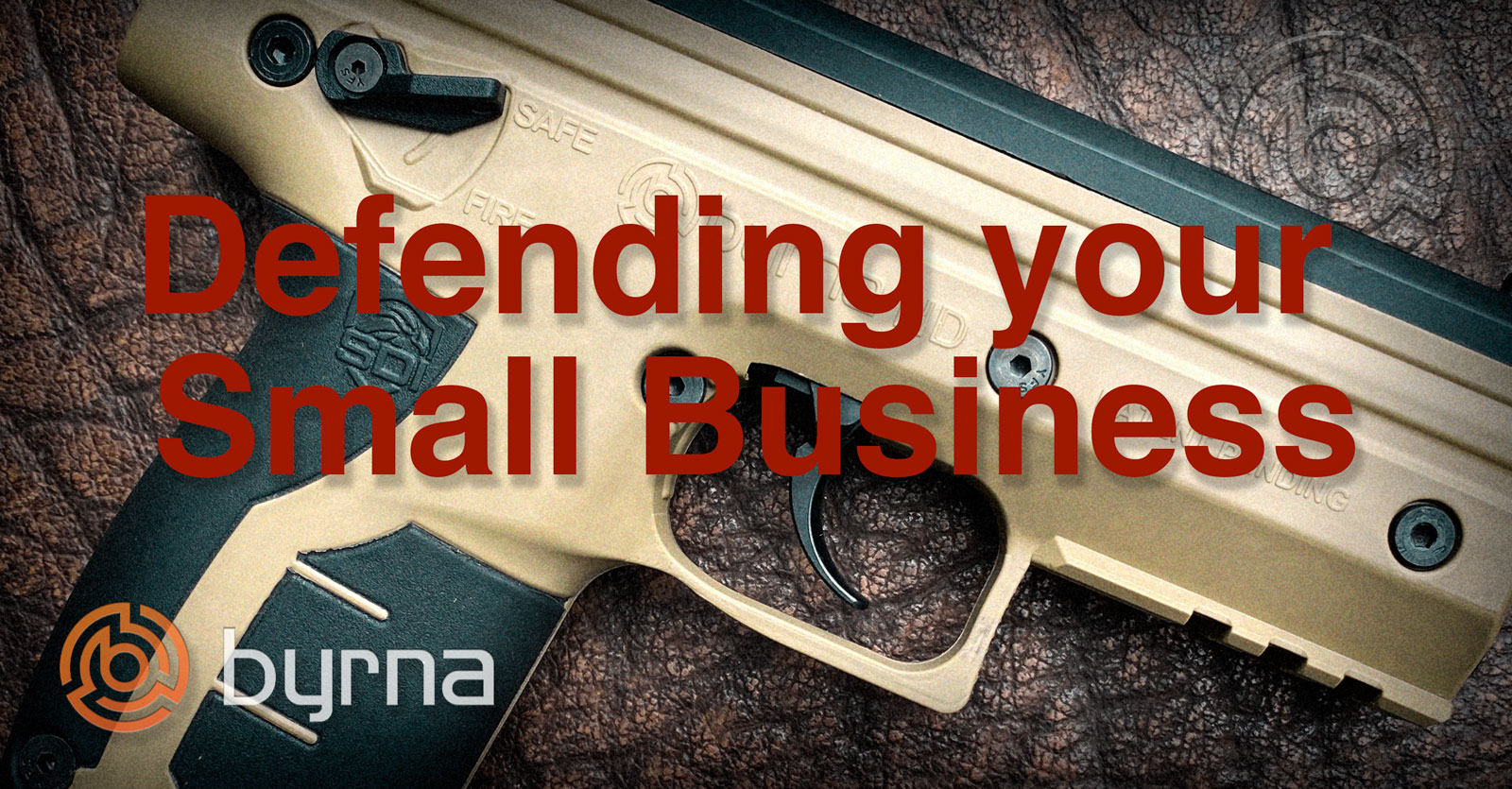 Whatever the reason, crime is on the rise on our piece of this lovely continent, and not a day goes by where somebody is not sharing about a home invasion, a farm attack, a highjacking and now, more and more frequently armed robberies inside shopping centers on restaurants, cellphone shops, and other small businesses.

If you think about it, it’s the ideal location for a criminal. Most people who do carry protection will not intervene, and those that would will think three times before employing what they have available because of the chance of injuring bystanders. The criminals have no such qualms.

It is thoughts like these that was the driver to start looking at defensive strategies for protecting our staff, guests, and property, should we ever end up in the very position we all pray every day not to have to face.

I think it goes without saying, but just so that it is said… I will say this clearly:

ABSOLUTELY NO AMOUNT OF MONEY OR STOCK
IS WORTH A HUMAN LIFE!

The average person reading this is not a super-cop, and most of your team is not trained in self defence or practicing and preparing on a daily basis. I will always suggest and promote using words to try and diffuse any situation first. Always try and remove yourself and your people from danger, and only intervene if you have no other choice.

And again, without practice, no self-defence device will work well. DO NOT develop a false sense of security!

That said, let’s look at options… 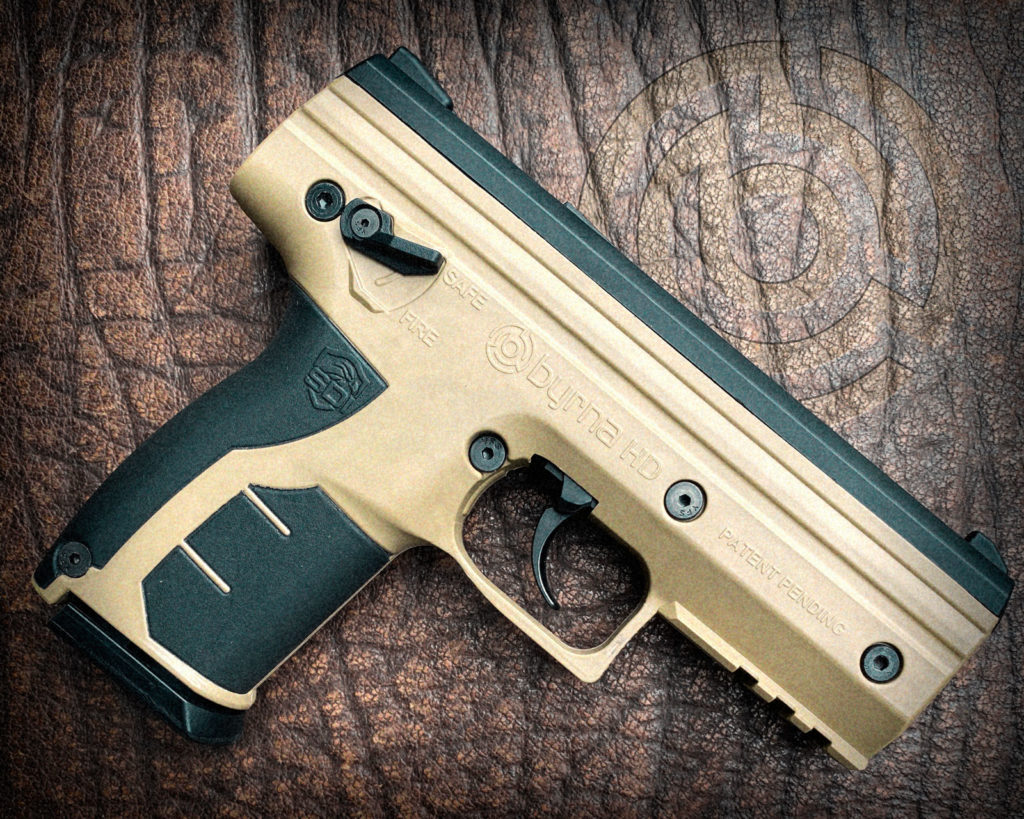 For all intent and purpose, the Byrna is a longer range security device. It is designed to deliver a pepper ball (technically a “Chemical Irritant”) to a distance of about 15 to 20 steps with enough force to break the ball with the sole intent of changing a person’s mind about doing what they have set out to do.

The goal is to give you time to remove yourself from danger or for others to escape from immediate threat, and frankly, it is pretty good at it. 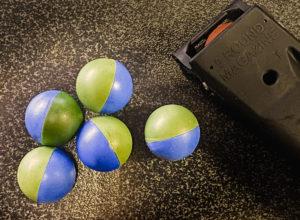 The Byrna HD is a medium velocity projectile launcher that looks like a compact pistol and is available in various traditional colours like Black, Olive Green and Tan, but also in Pink and Orange. It contains an 8g CO2 gas canister that propels 0.68 caliber solid or powder ball at around 280-310fps. And it has a magazine that carries 5 projectiles at a time. The HD kit comes with an extra magazine.

When firing the projectiles, the noise from the security device is not as loud as a handgun, but still louder than expected. Couple that with the sting from a solid impact or two and then a Byrna Black pepper ball, and most assailants will cut their losses, or at least give you a few valuable moments to get yourself away from there.

The fact that it looks like a weapon is, however, both a blessing and a curse.

On the one hand, at the lowest level, people making the assumption that you are carrying a weapon might rethink their plans… Like a locked door or burglar bars, they can probably get in, but it is just less hassle to try elsewhere… which is what we want. However, someone that has serious intent to do harm making the same assumption, might feel inclined to escalate the threat level. Personally, I feel that the element of surprise is your best ally in this case.

How does it handle?

I was very impressed. It is quite accurate on short distances and groups consistently well (although mine hits target slightly left and low). That said, I am pedantic and had no problem accurately hitting a volunteer on the bum at 15 paces. Centre Mass firing will not pose a problem.

The thing to remember is that you need to use it as it was designed. Draw down fast and clean, then double-tap whatever you are shooting at. Quick and intentional on the trigger. If you try to be too accurate, with a slow pull on the trigger, it seems to disengage instead of releasing a projectile. This never happened to me, but I saw it happen to others. I think the problem is that people expect recoil, and there is none… which, on the plus side, also makes accurate follow up shots very easy!

The trigger has a long travel, and needs to be completely released to reset, but it’s not a hard trigger. After the first ten projectiles have left the barrel, you will already be comfortable with the trigger. The women that tried my unit had no problem firing it, and with a little bit of effort, even my 6yr old daughter could send balls downrange. In her case, it wasn’t so much the stiffness of the trigger that made it difficult as her fingers that is still too short… but she loved shooting it! And just before you berate me for letting my little girl handle the Byrna, my goal is to have her comfortable and familiar with the system, so if she is ever part of a problem situation, it will not add to her fear and stress… she will know exactly what to expect! 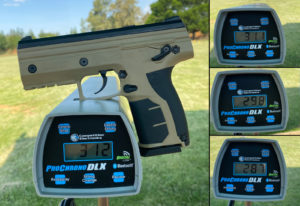 The Byrna HD sits very comfortably in the hand, is not too heavy, but not so light that it feels like a toy. To give you an idea of sturdiness: Every person I have handed it to tried to rack the unit to check if the chamber is clear. And in case you were wondering, there is nothing to rack. It’s a single unit.

In testing, a new CO2 gas cartridge will start off flinging a ball downrange at around 310-312fps (about 9.9ft-lbs of Kinetic Energy)… as I ran through two magazines, my last round measured at 287fps. Still more than enough to do the job, just a slightly smaller bruise.

Security and Self Defence use…

The Byrna HD shines where you have a little bit of distance, or need to keep a threat at distance. Five to 15 meters is the sweet spot, and although hitting a threat with a solid ball is great, simply hitting something solid close to a threat to break a pepper ball near them will get them moving fast. And no… this is NOT a paintball marker. Getting hit with a paintball smarts… this hurts. Or in other terms… everybody is ready for another round of paintball, but not many of my volunteers were ready to take a second shot with the Byrna HD (there always has to be that one guy!)

As far as the efficacy of the chemical irritant goes… Youtube is full of videos that should answer that question! The version we have available here in South Africa contains chemical ingredients that is not allowed in other parts of the world. The Byrna Max projectiles contain a nice mix of the sting and burn, but organic and chemical. If you want the exact make-up of the Chemical Irritants, its available directly from Byrna, but in short, it is the stuff you need to have a carry permit for in places like the UK.

I have not decided on the best combination of projectiles in my magazines yet.

Watching new users with the device, it seems their first shot is always just a bit off as they fire while getting on target while 2nd and third is pretty solid. This makes me think an alternating combination of solid balls and pepper balls will be good for most scenarios under stress.

That said, there is no real benefit to loading a solid ball instead of a pepper ball. The solid ball will hurt more, because the chemical irritant ball will lose some of its impact energy as it breaks… but in the end, once you have decided to take action, then don’t hold back. If the only solution is to draw… commit to the action and ensure your safety and those you want to protect. No point in saving projectiles.

I do think that various situations might call for a different load-out on your magazines. In your case, having a “warning shot” first solid round might make sense. Your situation and scenarios would dictate your choice. When deciding, keep your main goals in mind:

A. Stop the action and change the threat’s mind about coming closer or continuing with their plan

B. Get out of danger 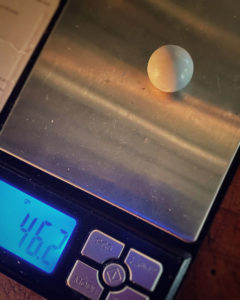 Things I really like about the Byrna HD is that it has a double-action trigger on the first shot. In other words, although you can pierce the CO2 cartridge in preparation, the first shot can pierce and release a projectile in the same instant. That means you are effectively in an “always prepared” state for the unit. What handgun owners would call, carrying “one-up”.

The Picatinny rail under the barrel is nice, but mounting anything there means you need a different holster than the standard, so keep that in mind. There are, however, tons of soft options and a custom Kydex holster should be easy to source.

The projectiles are good quality. They are round (less chance of flying off target) and they are accurately weighted. A handful of solid projectiles I grabbed and weighed were all within 0.8gr (that is grain, not gram) variance of each other, which is extremely good! my measurements ranged between 46.2gr to 47gr (about 3grams)

The extras are actually all quite nice, and includes hard Kydex OWB holsters or soft pouch holsters. Picatinny rail mounted flashlight or laser sights, extra magazines, and magazine carriers, etc, etc. The Army Ant Kydex Holster comes in a left or right-handed version and is very simple to modify and mount on a solid surface (like under a counter, behind a door, or inside your vehicle, although… but again, that would be a custom job.) 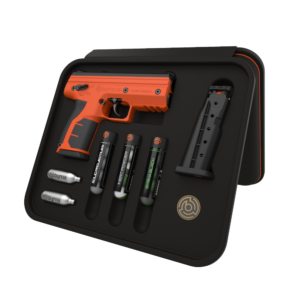 The cost to maintain and practice with it is about the same as a normal handgun. You will need to purchase extra solid or training rounds, as well as CO2 gas canisters. In practice, I got 15 good shots off a single gas canister (3 magazines), usually a few shots more, and at a training distance of about 5m, you wouldn’t notice the drop in velocity.

About R500.00 will keep you busy for an afternoon of training (98 Solid balls and a 10 pack of CO2 cartridges – its actually just 9 cartridges, the 10th is an oil cartridge for maintenance) and if you have a nice soft trap, you should be able to catch and re-use most of your kinetic rounds, (just inspect them for cracks and deforming beforehand.) but that will almost halve your practice costs.

Actually, it is very comparable to a day on the range with a 9mm or .38 handgun, probably a bit cheaper.

People misjudge the value of practicing self defence scenarios. Sure, you will be better versed and smoother in your deployment of your defence, but more importantly, is the confidence that comes from knowing your strategy and tools. It is not so much the actions, than the benefit to your state of mind in crisis. Because you have prepared physically and mentally, You will think clearer and make better judgment calls. Acting instead of reacting.

If you think this is a solution for you, your staff, and your business, we have arranged for a discount for you if you order your unit directly from Byrna South Africa

You can also join the Facebook Group for further questions and discussions! 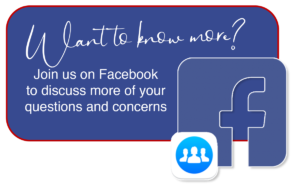